Welcome Joshua (and the snow). 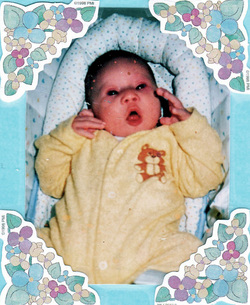 When Josh was born, I was 20 years old and single.   I was thrilled and prepared (or so I naively thought) for what that meant.   I was also completely ignorant about the path my life was about to take.  I had regular prenatal care, but no tests warned me of the detour ahead.  I didn’t even realize I was actually in labor all day until some time after midnight when I called my mother and said something along the lines of “it feels funny, but this can’t be labor pains.”   Being much wiser than I… lol… she guessed that yes, in fact it was and within an hour of reaching the hospital Josh was born.

This is one of the times I feel strange about not being able to completely remember.  Many women say that they don’t remember the actual pain of delivery, but they can vividly describe the rest of the day’s events.   My mother and Josh’s father were with me and have told me what happened.  I didn’t have any medications – even the local they tried to give me didn’t have time to take effect.   My mom wrote me a lovely card after the birth telling me how proud and amazed she was that I didn’t make a sound.   None of the screaming and cursing that I’ve seen on television - I missed my chance.   All I can say is that I was so focused and happy to be having a baby that I didn’t feel like yelling…

According to his baby book, his apgar scores were 8 and 9.  I adjusted to the fact that he had a “strange suck” and therefore I couldn’t nurse like I had planned.   He also had a low temperature and was jaundiced so they kept him under special lights.  His eyes were slightly slanted, but so what, so were mine.  Just before discharging us my primary care doctor who was also Josh’s pediatrician suggested that we schedule an appointment with a specialist from Children’s Hospital.  He didn’t elaborate, just as a follow-up.  Or so I thought.

Josh was a quiet baby and we had several days together when ignorance was bliss.   I hovered over him, rocked him to sleep and constantly checked to see if he was breathing.   Someone in his father’s family suggested that I make him cry so they could hear his voice since he rarely made a sound.   When he did stir I didn’t usually let it get to an actual cry if I could help it.    By the time we had to go to the specialist I was trained to jump at the slightest movement.

My mother went with me to our first appointment with the genetics counselor.   I still had no idea why we were there.  The doctor examined him – looking closely at his eyes and his hands, and holding him in a way I thought was inhumane in order to test his muscles.  When she finished she said that she’d have to do blood work to be sure but that it was obviously Down syndrome.   Ok, I thought, what does that mean?   I had never heard of it before.   But wait, blood work?  She would not allow me to hold him or even go with him while they drew blood.   I got very nervous when she took him away and when Josh started to cry I lost control!  I didn’t let him cry much but even this inexperienced mother knew the difference between a cry for attention and a cry of pain.   It was the worst sound I had ever heard.   When she finally came back and told us to schedule a follow-up in two weeks I was distraught.   I held myself together long enough to ask a question before bolting out the door with my baby.   “You said Down syndrome?  What does that mean exactly?”

The doctor looked at me in disbelief.   I’m sure she thought someone had already told me.  She matter-of-factly rattled off words that sent me reeling: Mongolism, retardation, disability, delays, heart conditions, speech problems, muscle weakness, and probably more.   I was in total shock.

The car ride home was torture.   Mom drove and I sat in the back with Josh.  Well, I slumped.   The forty-five minute trip consisted of me sobbing and trying to wrap my head around what had just happened.   At one point, my mother stopped the car and basically told me to get over myself.  I’m a mother now she said, and I had to do what needed to be done, for his sake.   It must have sunken in because that was the last time I allowed myself to cry about it.

I had a lot to learn and the literature was scary – to say the least.   Luckily for me a few months later I got a phone call from someone who had a son two weeks before I did.  He had Down syndrome too and she was starting a support group for parents.  I was reluctant at first; still thinking I could handle this on my own.   But that phone call and the friendships and experiences that followed it have been priceless.  Thank you Mom for forcing me to get moving and Patti for steering me in the right direction and helping me navigate this path.   It hasn’t been what we expected, but it was worth every step!